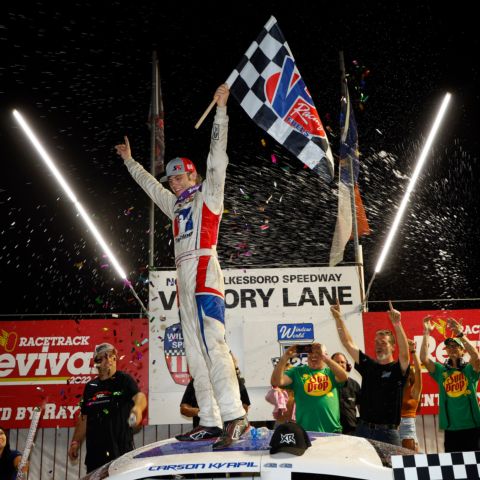 Dale Earnhardt Jr. brought innumerable fanfare and excitement to a sold-out North Wilkesboro Speedway on Wednesday night, but the spotlight shined brightest on one of Earnhardt’s JR Motorsports drivers.

Kvapil won the pole, led the most laps, turned the fastest lap time – a blistering 20.223 seconds – and withstood all comers on a restart with two laps to go.

“It’s huge to win at North Wilkesboro,” said Kvapil, who was eight years old the last time North Wilkesboro hosted a late model tour race. “We were able to sweep the first late model show here in 11 years. We had such a dominant car. I could tell it was going to be good from the moment the green flag dropped.

“I was a bit worried about Mason (with two laps to go), because I knew he’d square up with my bumper in Turns 1 and 2. That was probably my only weak spot, but he raced me clean. I’ll definitely remember that the next time I’m around him. I’ll race him the same way.”

With a sea of green-clad fans roaring their approval, Earnhardt rallied from ninth to third in the final 50 laps. Earnhardt’s No. 3 Sun Drop Chevrolet – painted like the late model car he drove in the 1990s – took some bumps and scrapes, but emerged intact at the end of the night.

“That was a tremendous amount of fun,” the NASCAR Hall of Fame inductee said. “We had a really good car. At the midpoint of the race, we had some contact and it knocked the right-rear quarter panel onto the right-rear tire, so it was just burning up the tire. I couldn’t move forward the way I wanted, hanging out in the backside of the top 10. When we came in and put right-side tires on and fixed the quarter panel, man, that thing flew.

“Josh (Berry, Earnhardt’s crew chief for the night and a driver on his NASCAR Xfinity Series team) did a great job. … That’s probably the best late model car I’ve ever driven.”

Earnhardt hadn’t raced since his annual Xfinity Series one-off, which resulted in an 11th-place finish at Martinsville Speedway in April.

He qualified sixth for Wednesday’s race and dropped out of the top 10 early, but made a spirited rally in the closing stages.

A 1-3 finish for JRM was more than enough reason for Earnhardt to share in Kvapil’s raucous victory lane celebration.

“We’re certainly tickled with how everything happened,” Earnhardt said. “Carson did such a great job. Honestly, I’d rather he win just for his development, long-term. … This was a lot of fun. I had a little compound off Turn 2 and all my family here. I was happy to be part of it.

“When I was sitting in the car, you could see all the fans and you could just feel the energy. It was special. It honestly felt like you were back in 1990.”